March 29, 2015
Quantum dots are tiny particles or nanocrystals of a semiconducting material with diameters in the range of 2-10 nanometers (10-50 atoms). They were first discovered in 1980.1 Quantum dots display unique electronic properties, intermediate between those of bulk semiconductors and discrete molecules, that are partly the result of the unusually high surface-to-volume ratios for these particles.2-4 The most apparent result of this is fluorescence, wherein the nanocrystals can produce distinctive colors determined by the size of the particles.
Due to their small size, the electrons in quantum dots are confined in a small space (quantum box), and when the radii of the semiconductor nanocrystal is smaller than the exciton Bohr radius (exciton Bohr radius is the average distance between the electron in the conduction band and the hole it leaves behind in the valence band), there is quantization of the energy levels according to Pauli’s exclusion principle (Figure 1).5,6 The discrete, quantized energy levels of quantum dots relate them more closely to atoms than bulk materials and have resulted in quantum dots being nicknamed 'artificial atoms'. Generally, as the size of the crystal decreases, the difference in energy between the highest valence band and the lowest conduction band increases. More energy is then needed to excite the dot, and concurrently, more energy is released when the crystal returns to its ground state, resulting in a color shift from red to blue in the emitted light. As a result of this phenomenon, quantum dots can emit any color of light from the same material simply by changing the dot size. Additionally, because of the high level of control possible over the size of the nanocrystals produced, quantum dots can be tuned during manufacturing to emit any color of light.7
Quantum dots can be classified into different types based on their composition and structure. 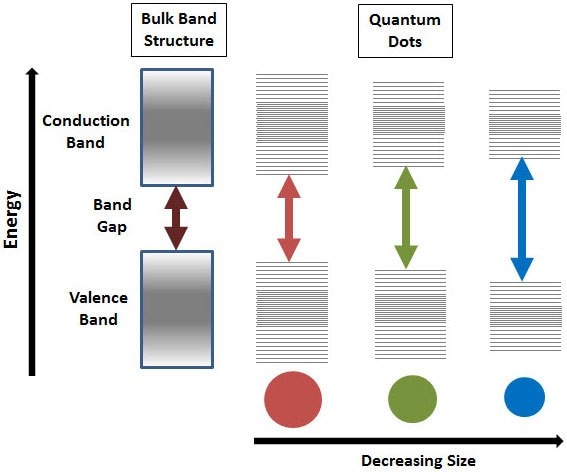 Figure 1. Splitting of energy levels in quantum dots due to the quantum confinement effect, semiconductor band gap increases with decrease in size of the nanocrystal.

Quantum dots can be single component materials with uniform internal compositions, such as chalcogenides (selenides or sulfides) of metals like cadmium or zinc, example, CdSe (Aldrich Prod. No. 662550) or CdS (Aldrich Prod. No. 662593). The photo- and electroluminescence properties of core-type nanocrystals can be fine-tuned by simply changing the crystallite size.

The luminescent properties of quantum dots arise from recombination of electron-hole pairs (exciton decay) through radiative pathways. However, the exciton decay can also occur through nonradiative methods, reducing the fluorescence quantum yield. One of the methods used to improve efficiency and brightness of semiconductor nanocrystals is growing shells of another higher band gap semiconducting material around them. These quantum dots with small regions of one material embedded in another with a wider band gap are known as core-shell quantum dots (CSQDs) or core-shell semiconducting nanocrystals (CSSNCs). For example, quantum dots with CdSe in the core and ZnS in the shell (Aldrich Product Nos. 731838, 731870) available from Aldrich Materials Science exhibit greater than 80% quantum yield. Coating quantum dots with shells improves quantum yield by passivizing nonradiative recombination sites and also makes them more robust to processing conditions for various applications. This method has been widely explored as a way to adjust the photophysical properties of quantum dots.8-10

The unique size and composition tunable electronic property of these very small, semiconducting quantum dots make them very appealing for a variety of applications and new technologies.12
Quantum dots are particularly significant for optical applications owing to their bright, pure colors along with their ability to emit rainbow of colors coupled with their high efficiencies, longer lifetimes and high extinction coefficient. Examples include LEDs and solid state lighting, displays and photovoltaics.7,13,14
Being zero dimensional, quantum dots have a sharper density of states than higher-dimensional structures. Their small size also means that electrons do not have to travel as far as with larger particles, thus electronic devices can operate faster. Examples of applications taking advantage of these unique electronic properties include transistors, solar cells, ultrafast all-optical switches and logic gates, and quantum computing, among many others.13-15
The small size of quantum dots allow them to go anywhere in the body making them suitable for different bio-medical applications like medical imaging, biosensors, etc. At present, fluorescence based biosensors depend on organic dyes with a broad spectral width, which limits their effectiveness to a small number of colors and shorter lifetimes to tag the agents. On the other hand, quantum dots can emit the whole spectrum, are brighter and have little degradation over time thus proving them superior to traditional organic dyes used in biomedical applications.16
Aldrich Materials Science offers semiconductor, core-shell and alloyed quantum dots tuned to emit different colors in the visible spectrum while exhibiting high quantum yield. Nanocrystals are available in both aqueous and organic formulations suitable for use in different applications.
Find the complete list of Quantum Dots offered by Aldrich Materials Science here.
- See more at: http://www.sigmaaldrich.com/materials-science/nanomaterials/quantum-dots.html#sthash.i1dvwoOf.dpuf