August 28, 2015
photo credit: ESA/Hubble & NASA, Acknowledgement: Judy Schmidt
Share on facebook65.5K Share on twitter146 Share on reddit Share on google_plusone_share More Sharing Services
With so many bewilderingly beautiful examples of these cosmic objects taken over the years, it’s difficult to pick a favorite planetary nebula. But of these stunning scenes, Minkowski's Butterfly has always evoked a sense of awe in me. Never failing, here I am once again hypnotically staring into my computer screen, bedazzled by Hubble’s latest portrait of the celestial butterfly.
Officially called PN M2-9, the planetary nebula also goes by the slightly more telling name of the Twin Jet Nebula. As you can see, unlike ordinary planetary nebulae that look like colorful bubbles or piercing eyes, M2-9 is different in that it has two distinct trails of material emanating from a central point. This unique hourglass appearance, almost like two jellyfish head-butting one another, is owed to the fact that the heart of this object is occupied by not one star but two, locked in a gravitational embrace known as a binary star system.
This means that M2-9 falls into the bipolar nebulae category, characterized by two symmetrical and radially opposed lobes. These iridescent curtains are the outer layers of gas that are shed when an elderly star runs out of fuel and begins to collapse upon itself. When the central stars, or star, evolve into their next phase – white dwarves – they emit vast amounts of heat into the surrounding shell of material, illuminating it and resulting in a spectacularly colorful display for us to see. But this won’t be around forever; eventually the rejected layers will fade into the vast, dark surroundings of space.
Scientists think that the two stars at the center of this nebula are around as massive as our Sun, but one is slightly smaller and further evolved than its partner that has already shed its outer layer into space. As with all planetary nebulae, the shape of the glowing clouds of gas are thought to be influenced by the rotation of the star system from which they originate. That being said, astronomers are still uncertain as to whether a binary system is a prerequisite for bipolar nebulae.
While, like many real butterflies, the “wings” sport a dazzling rainbow of colors, the faint blue streaks actually represent ferocious jets of material, pouring into space at speeds greater than 1 million kilometers per hour (620,000 mph). This feature is once again a result of the celestial duo in the middle, which take about 100 years to circle each other.
The Twin Jet Nebula’s updated profile is quite different from the scene responsible for its fame, shown below. Although both were taken using Hubble, the first, snapped in 1997, was captured using the scope’s Wide Field Planetary Camera 2. This latest image makes use of pictures obtained by its Space Telescope Imaging Spectrograph. 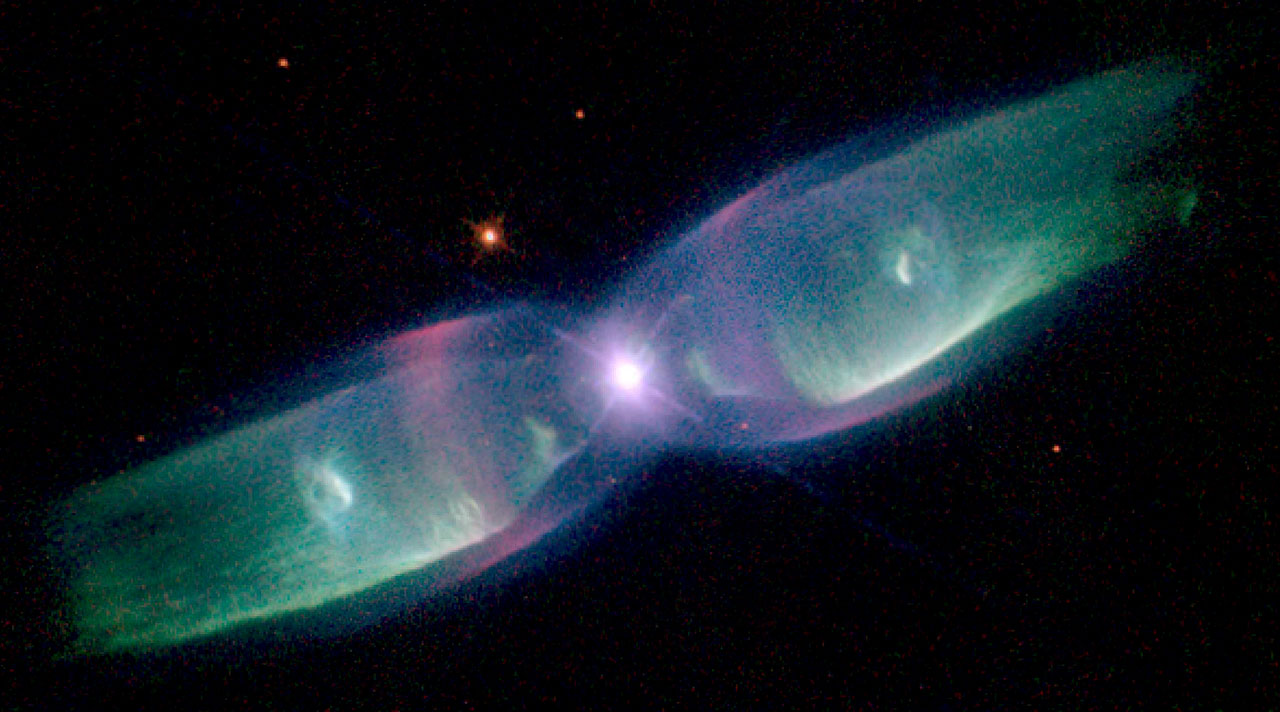