In this article we’ll try to find a solution to a common problem of Wi-Fi connection in Windows 8.1, namely, the limited Internet connectivity and self-disconnection from a Wi-Fi access point.
The problem shows up in the  following:
Windows 8.1 sees a Wi-Fi access point and connects to it without any problem, the computer can access the Internet, but in several minutes of normal operation the Internet access is lost, the yellow exclamation mark appears on the network icon and the message about a limited connectivity comes out in the network connection box («No internet access» / «The connection is limited»). When trying to reconnect to the access point, the Internet access becomes available only for a short period of time.
Or this way:
After you upgraded to Windows 8.1, the message «Unidentified network. No Internet access» appears in Wi-Fi connection properties.
Contents of this article
You can run into the same problem while updating the Wi-Fi adapter driver. In both cases, any other devices (smartphones, computers, laptops) can connect to the access point and use the Internet without any problems (i. e. the problem is not in the access point). 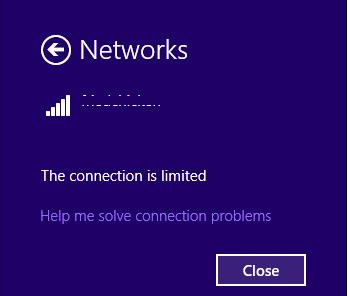 How to Delete a Wi-Fi Network Profile

It is likely that the settings of the Wi-Fi router and/or WEP/WPA2 have been changed, but the system tries to connect to the access point with the settings that are stored in Windows in the Wi-Fi network profile. Try to delete the existing Wi-Fi network profile (how to do it is described in the chapter: How to Delete a Wi-Fi Network Profile).
After you have deleted the profile, try to connect to the access point again and enter the password.

Power Save Mode of the Wi-Fi Adapter

Another possible reason of Win 8.1 to lose the connection to the Wi-Fi access point is the improper settings of the Power Save Mode of your Wi-Fi adapter. It makes Windows turn off the Wi-Fi adapter if it is not used for some time to save power. Check if this mode is enabled in the wireless device settings. Open the properties of the wireless connection and press the Configure button. 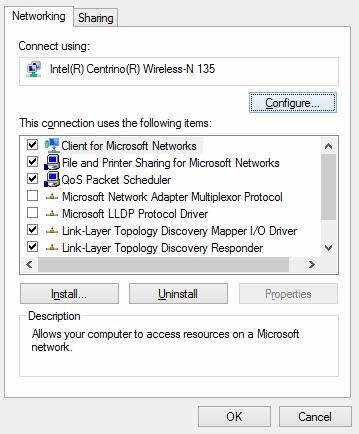 Go to the Power Management tab and make sure that the option Allow the computer to turn off this device to save power is not checked. 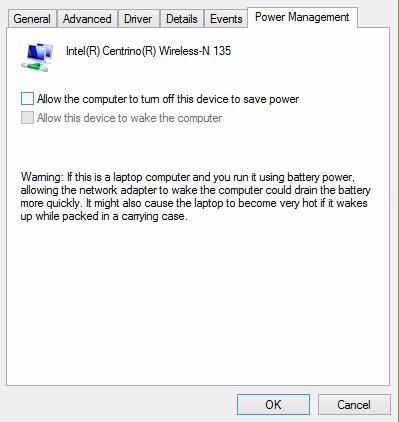 You should also make sure that the TCP/IP stack with standard settings is used on this computer. To do it, reset the settings of the TCP/IP stack to default with netsh:
After the command has been run, restart the system, connect to the Wi-Fi access point and try to access the Internet.

In Windows Vista / Windows Server 2008 a new function, TCP Receive Window Auto-Tuning, was implemented to dynamically change the size of the acceptor’s memory buffer (due to this function, the maximum size of the window can be increased to 16MB). In theory, this feature should improve the network bandwidth and optimize the performance of the network subsystem. But in practice, autotuning of the Receive Window (RWIN) size results in many network issues. In Windows 8.1, TCP RWIN Auto-Tuning was preserved and sometimes the TCP autotuning means conflict with the settings of network hardware or firewalls (not supporting or prohibiting TCP Window scaling) causing package loss and the speed of the local network or the Internet decreases or even the access is lost completely.
So we recommend to disable the TCP/IP autotuning. To do it, open the command line with the administrator privileges and run the following commands one by one:
Tip. These commands are especially effective in the devices with Windows RT (including Surface), but they also can help in desktop versions of  Windows 8.1. 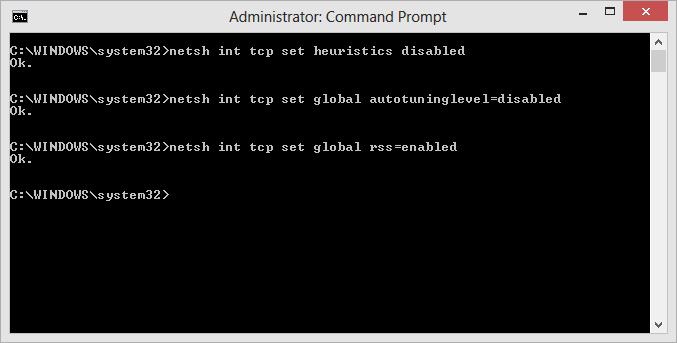 To check if the TCP/IP autotuning is disabled, use the following command:
After you run all the commands, restart your computer.

Troubles with Wi-Fi adapter drivers can be another source of problems. Try to update the drivers to the latest version available on the manufacturer’s website. If the issue of the limited Internet connection is not solved this way, try to use the older version of the driver. See «Rollback to the Older Version of the Wi-Fi Adapter Driver» for more info.

Rollback to the Older Version of the Wi-Fi Adapter Driver

Another effective technique is the rollback to the older version of the wireless adapter driver.
Tip. This technique proved highly effective for the users having upgraded from Windows 8 to Windows 8.1 especially for the devices with Wi-Fi adapters Broadcom 802.11 and Qualcomm Atheros AR9003WB. The possible reason is the incorrect version of the new drivers in Windows 8.1, but there is no information about it yet on the Microsoft support website.
To roll back to the older version of the Wi-Fi adaptor driver in Windows 8:
The specified methods should help to solve problems with the limited Wi-Fi connection in Windows 8.1. If you have found some other ways to handle the issue, please, describe it in the comments.