More…
• Strange and Rare Galaxy Puzzled Astronomers
• New Horizons Spacecraft will Step On Pluto after 9 Years in Space
Construction of the telescope is expected to cost 1.083 billion euros, or $1.34 billion (at 2012 prices). An optical and infrared telescope, the E-ELT will feature a gargantuan 39-meter aperture that will make the scope the “biggest eye on the sky” and give it unparalleled capabilities, according to the ESO. It is to be built atop Cerro Armazones, a 3,000-meter (10,000-foot) mountain in Chile’s Atacama Desert. The desert is one of the driest regions on Earth and is considered one of the best places from which to observe the sky. The new telescope will help researchers make new scientific discoveries within the areas of exoplanets (an exoplanet is a planet orbiting a star other than the Sun) and the composition of stars in both near and distant parts of the universe. 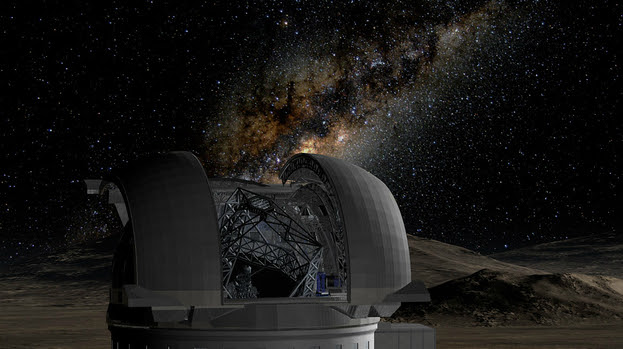 
“This is fantastic news for Danish and European astronomy. The E-ELT is a flagship for the exploration of space and the areas of astrophysics that the E-ELT will give a huge boost to are absolutely central to Danish astrophysics. In particular, the two aforementioned areas of study, exoplanets and the most distant, first galaxies in the universe are very active research fields in Denmark. This is also very good news for the Danish universities who have chosen to invest considerable amounts of money into Danish participation in the project. Now the project is on track and we can finally begin to realise the dream,” says a very happy Johan Fynbo, Professor at the Dark Cosmology Centre at the Niels Bohr Institute at the University of Copenhagen.
Want to stay on top of all the space news? Do Not Forget To Follow Us:

Follow @CosmosUp
Lisa Kaltenegger, Director of Pale Blue Dots, an institute that aims to study Earth-like planets, said in a statement that the power of the E-ELT will greatly help in gathering accurate data regarding life-sustaining features of other planets. “We need big telescopes like this because Earth-like planets are smaller, and have relatively thin atmospheres – so we need to take in a lot of light to analyze them and search of potential signatures of life,” she said.