Hawking: information lost in black holes could be stored in alternate universes 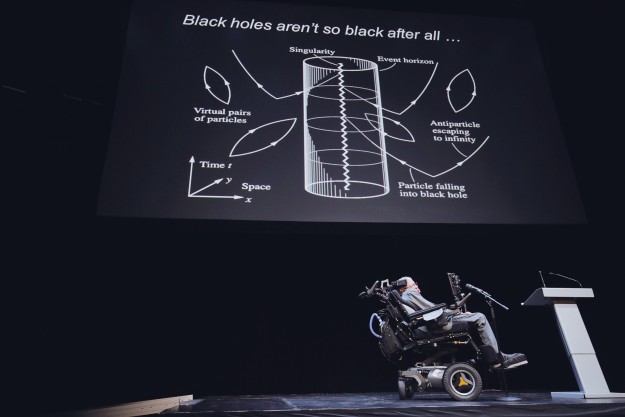 Stephen Hawking revealed his latest idea about where he believes lost information wind up after being sucked into a black hole — in alternative universes. Photo: Adam af Ekenstam
“If you feel you are in a black hole, don’t give up. There’s a way out,” said Stephen Hawking tonight in a public lecture in Stockholm while revealing his latest idea that black holes offer a possible passage to another universe.
The legendary scientist and author said tonight that he has discovered a mechanism “by which information is returned out of the black hole.”
“I will describe it in my conference talk tomorrow morning.” Hawking said, referring to the Hawking Radiation Conference being held at KTH Royal Institute of Technology.
The conference, which was organized by UNC physicist Laura Mersini-Houghton,  is dedicated to finding a solution to one of science’s notoriously difficult questions: what happens to the information about the physical state of things that are swallowed up by black holes? Is it retrievable? The laws of quantum mechanics demand that it should be; but that presents a problem, or paradox, for our current understanding of black holes.
Hawking said he has been working on supertranslations with Malcolm Perry and Andrew Strominger, and that his findings suggest the possibility that missing information could be stored in alternate universes.
“The existence of alternative histories with black holes suggests this might be possible,” Hawking said. “The hole would need to be large and if it was rotating it might have a passage to another universe. But you couldn’t come back to our universe. So although I’m keen on space flight, I’m not going to try that.
“The message of this lecture is that black holes ain’t as black as they are painted. They are not the eternal prisons they were once thought. Things can get out of a black hole both on the outside and possibly come out in another universe.”
He’ll expand on this tomorrow during the conference at KTH Royal Institute of Technology.