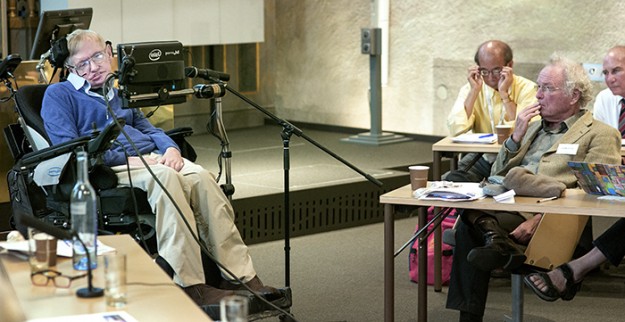 Stephen Hawking makes his presentation today at an extraordinary gathering of world-leading physicists at KTH Royal Institute of Technology. (Photo: Håkan Lindgren)
It might not settle the argument over what happens to information trapped in black holes, but Stephen Hawking’s new idea dominated the discussion today at a specially-convened meeting of world-leading physicists, held at KTH Royal Institute of Technology.
Black holes don’t actually swallow and destroy physical information, according to an idea Hawking proposed at the Hawking Radiation conference. Instead, they store it in a two-dimensional hologram, and then it gets severely jumbled up.
You might ask yourself why this distinction matters, but it addresses one of the most baffling questions facing a generation of physicists: What happens to the information about the physical state of things that are swallowed up by black holes? Is it destroyed, as our understanding of general relativity would predict?
If so, that would violate the laws of quantum mechanics. So, which theory of physics is right? Hawking’s answers appears to be they both are.
Hawking is in town for a weeklong conference on the information loss paradox, which was organized byUNC Physicist Laura Mersini-Houghton. She assembled 32 of the world’s leading physicists to tackle the problem, which has vexed physicists for a generation.
Everything in our world is encoded with quantum mechanical information; and according to the laws of quantum mechanics, this information should never entirely disappear, no matter what happens to it. Not even if it gets sucked into a black hole.
But Hawking has dropped the idea that the information goes down the hole. His new idea is that the information doesn’t make it inside the black hole at all. Instead, it’s permanently encoded in a 2D hologram at the surface of the black hole’s event horizon, or the field surrounding each black hole which represents its point of no return.
As we understand them, black holes are regions of space-time where stars, having exhausted their fuel, collapse under their own gravity, creating a bottomless pit that swallows anything approaching too closely. Not even light can escape them, since their gravitational pull is so infinitely powerful.
“The information is not stored in the interior of the black hole as one might expect, but in its boundary — the event horizon,” he said. Working with Cambridge Professor Malcolm Perry (who spoke afterward) and Harvard Professor Andrew Stromberg, Hawking formulated the idea that information is stored in the form of what are known as super translations.
“The idea is the super translations are a hologram of the ingoing particles,” Hawking said. “Thus they contain all the information that would otherwise be lost.”
This information is emitted in the quantum fluctuations that black holes produce, albeit in “chaotic, useless form,” Hawking said. “For all practical purposes the information is lost.”
But in his lecture in Stockholm the previous night, Hawking also offered compelling thoughts about where things that fall into a black hole could eventually wind up.
“The existence of alternative histories with black holes suggests this might be possible,” Hawking said. “The hole would need to be large and if it was rotating it might have a passage to another universe. But you couldn’t come back to our universe.
“So although I’m keen on space flight, I’m not going to try that.”
The Hawking Radiation conference is co-sponsored by Nordita, UNC and the Julian Schwinger Foundation. Nordita is co-hosted by KTH and Stockholm University.
David Callahan
Watch the presentation