From Wikipedia, the free encyclopedia
Superfluidity is a state of matter in which the matter behaves like a fluid with zero viscosity; where it appears to exhibit the ability to self-propel and travel in a way that defies the forces of gravity and surface tension. While this characteristic was originally discovered in liquid helium, it is also found in astrophysics, high-energy physics, and theories of quantum gravity. The phenomenon is related to Bose–Einstein condensation, but neither is a specific type of the other: not all Bose-Einstein condensates can be regarded as superfluids, and not all superfluids are Bose–Einstein condensates. 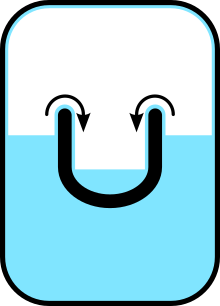 Fig. 1. Helium II will "creep" along surfaces in order to find its own level—after a short while, the levels in the two containers will equalize. The Rollin film also covers the interior of the larger container; if it were not sealed, the helium II would creep out and escape. 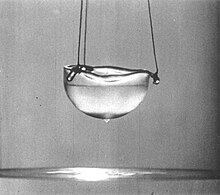 Fig. 2. The liquid helium is in the superfluid phase. As long as it remains superfluid, it creeps up the wall of the cup as a thin film. It comes down on the outside, forming a drop which will fall into the liquid below. Another drop will form—and so on—until the cup is empty.

Main article: Superfluid helium-4
In liquid helium, the superfluidity effect was discovered by Pyotr Kapitsa and John F. Allen. It has since been described through phenomenological and microscopic theories. In liquid helium-4, the superfluidity occurs at far higher temperatures than it does in helium-3. Each atom of helium-4 is a boson particle, by virtue of its integer spin. A helium-3 atom is a fermion particle; it can form bosons only by pairing with itself at much lower temperatures. This process is similar to the electron pairing in superconductivity.

Superfluidity in an ultracold fermionic gas was experimentally proven by Wolfgang Ketterle and his team who observed quantum vortices in 6Li at a temperature of 50 nK at MIT in April 2005.[1][2] Such vortices had previously been observed in an ultracold bosonic gas using 87Rb in 2000,[3] and more recently in two-dimensional gases.[4] As early as 1999 Lene Hau created such a condensate using sodium atoms[5] for the purpose of slowing light, and later stopping it completely.[6] Her team then subsequently used this system of compressed light[7] to generate the superfluid analogue of shock waves and tornadoes: "These dramatic excitations result in the formation of solitons that in turn decay into quantized vortices—created far out of equilibrium, in pairs of opposite circulation—revealing directly the process of superfluid breakdown in Bose-Einstein condensates. With a double light-roadblock setup, we can generate controlled collisions between shock waves resulting in completely unexpected, nonlinear excitations. We have observed hybrid structures consisting of vortex rings embedded in dark solitonic shells. The vortex rings act as 'phantom propellers' leading to very rich excitation dynamics."[8]

The idea that superfluidity exists inside neutron stars was first proposed by Arkady Migdal.[9][10] By analogy with electrons inside superconductors forming Cooper pairs due to electron-lattice interaction, it is expected that nucleons in a neutron star at sufficiently high density and low temperature can also form Cooper pairs due to the long-range attractive nuclear force and lead to superfluidity and superconductivity.[11]

Main article: Superfluid vacuum theory
Superfluid vacuum theory (SVT) is an approach in theoretical physics and quantum mechanics where the physical vacuum is viewed as superfluid.
The ultimate goal of the approach is to develop scientific models that unify quantum mechanics (describing three of the four known fundamental interactions) with gravity. This makes SVT a candidate for the theory of quantum gravity and an extension of the Standard Model. It is hoped that development of such theory would unify into a single consistent model of all fundamental interactions, and to describe all known interactions and elementary particles as different manifestations of the same entity, superfluid vacuum.