July 22, 2016
If you’re a postmenopausal women looking to keep your brain sharp (really, isn’t everyone?), a growing body of research shows that taking estrogen is probably not the way to go, even if you ask for a prescription as soon as your menstrual periods start to dwindle.
On the other hand, postmenopausal hormone therapy won’t dull your brain, either, according to a new study out this week. That’s reassuring for women who opt for estrogen to relieve symptoms such as hot flashes, which, along with prevention of osteoporosis, are the only Food and Drug Administration-approved reasons for going on the hormone.
The latest study on this topic, published online by the journalNeurology, investigated whether taking estrogen around the time of the menopause transition protects the brain, while going on it later doesn’t. The timing hypothesis has been circulating for at least a decade and a half or so, ever since the landmark Women’s Health Initiative (WHI) concluded that menopausal hormone therapy does not protect women against diseases of aging, such as heart attack, stroke or dementia, and, in s0me cases, might even increase women’s risk of them. As a result of the WHI, the proportion of postmenopausal women using estrogenplummeted, although millions still do.
Critics argued that most of the women in the WHI were too far past menopause to benefit from estrogen. The WHI had randomly assigned more than 27,000 women ages 50 to 79 to take either hormone pills or placebo pills. The majority were age 60 to 69, or roughly a decade to two decades past menopause. 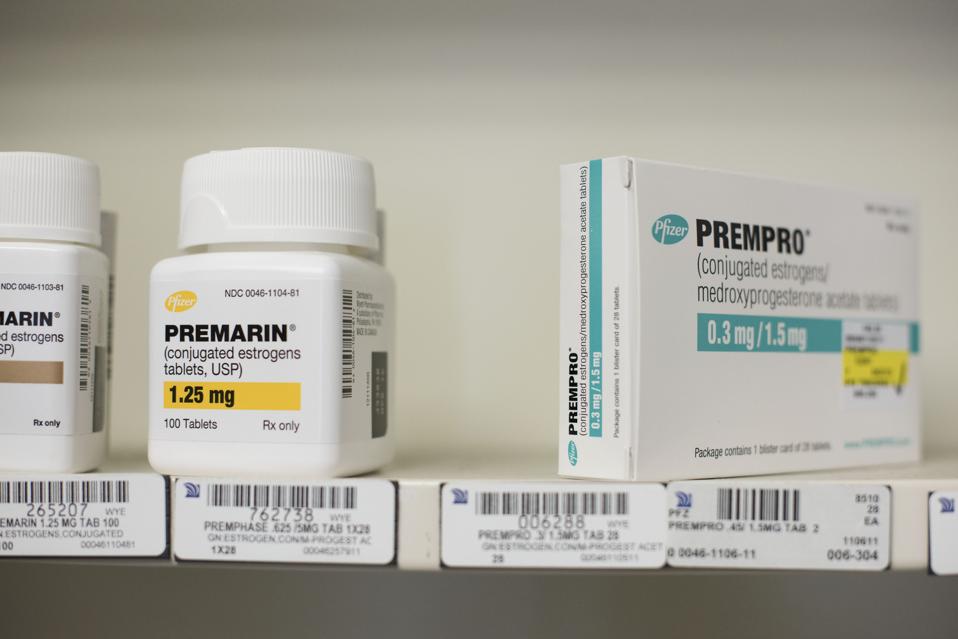 Pfizer menopause drugs Premarin, right, and Prempro, which contain the hormone estrogen, sit on a pharmacy shelf. A new study confirms that going on estrogen after menopause does not help keep women’s brains sharp, no matter how long after menopause they start taking it. (Photographer: Daniel Acker/Bloomberg)
“The question about timing, I think, is legitimate,” Dr. Victor Henderson, lead author of the new study, told me. Estrogen affects a range of tissues, each of which has to be considered individually as far as the timing of treatment, said Henderson, a professor of health research and policy and of neurology and neurological sciences at Stanford University.
For example, Henderson and his collaborators reported in March in theNew England Journal of Medicine that estrogen had a beneficial effect on study participants’ hearts only in those who had started taking it within six years of menopause. On the other hand, he said, research has shown that estrogen helps strengthen bones but increases the risk of stroke no matter how long after menopause women begin taking it.
Henderson’s findings about hormone therapy and the brain, as well as the recent findings about the heart, come out of the “Early vs. Late Intervention Trial with Estradiol,” or ELITE. Designed to answer the question of whether the timing of hormone therapy makes a difference on any tissue, ELITE enrolled two groups of healthy women. One group was fewer than six years past menopause, while the other was a decade or more past menopause. They were randomly assigned to take pills containing estradiol, a different type of estrogen than the one used in the WHI, or placebo pills.
(Because taking estrogen alone is known to increase the risk of uterine cancer, women assigned to the estradiol pills who still had their uteri were also given a vaginal gel containing progestin, another hormone that counteracts estrogen’s effects on the uterus. Because the women  weren’t supposed to know whether they were taking estradiol or placebo pills, those with a uterus assigned to the placebo pills were also given a placebo vaginal gel.)