Photo credit: A reconstruction of Homo naledi’s head by paleoartist John Gurche, who spent some 700 hours recreating the head from bone scans. University of the Witwatersrand, National Geographic Society and the South African National Research Foundation.
Share on facebook31.4K Share on twitter2.2K Share on reddit Share on google_plusone_share More Sharing Services
Brace yourself: this discovery is huge. So huge that its profound implications will shake up our very own family tree. The University of Witwatersrand, in collaboration with National Geographic, is proud to announce a remarkable story of human heritage. The discovery of an early human ancestor that sits beautifully within our own genus of Homo. I ecstatically present to you, Homo naledi.
This incredible fossil find comes from the richest single hominin assemblage so far discovered in Africa. A gift that keeps on giving, the species not only enlightens us on the origins and diversity of man, but also seems to display a behavior long believed to be unique to humans, even perhaps a defining feature of our species: deliberately disposing of its dead in an isolated chamber. The discovery has been published in two papers in the open access journal eLife.
A textbook-worthy accident, H. naledi was first stumbled upon two years ago by amateur cavers during an exploration of a cave system known as Rising Star, located within South Africa’s famous Cradle of Humankind World Heritage Site. From this, the Rising Star Expedition was born, starting in November 2013 with a 21 day exploration involving a team of 60 scientists and volunteer cavers. Expecting to recover a single skeleton, just three days in they realized they had much more than that, “something different and extraordinary,” research leader Lee Berger said at a press event IFLScience attended.
That something different turned out to be not several, but 15 individuals from a single hominin species, represented by more than 1,500 fossil elements found within a single chamber in total darkness some 90 meters (295 feet) from the entrance. Named in tribute to the chamber, naledi means “star” in the South African language Sesotho. And sure, 1,500 sounds like a lot, is a lot, but the team believes that there are thousands and thousands of remains still untouched. “The floor is practically made of bones of these individuals,” Berger added.

Homo naledi. cc John Hawks_Wits University
In fact, so many have been recovered that almost every skeletal element of the body is represented multiple times throughout different age groups, from infants to teens, to young adults and the elderly. And the species seems to be a wonderful pick and mix of both primitive and human-like features. An exceptionally tall hominid, the bipedal H. naledi stood at around 150 centimeters (5 feet) and was distinctively slender, with powerful, well-muscled joints. Its skinny human proportions and long legs likely relate to the fact that it didn’t have to support much bodyweight, weighing in at around 45 kilograms (100 pounds).
Tall this species may have been, but members had an astonishingly tiny head. So tiny that their brains were as small as that of the smallest australopith – a group of extinct early hominins – with the females’ brains only being slightly larger than a chimpanzee’s at around 450-550 cubic centimeters (27-34 cubic inches). There was only a very small discrepancy between males and females, not just in terms of brain size but throughout the entire body. In fact, all of the individuals were remarkably similar, more so than if you were looking at sets of identical human twins, Berger said. Consequently, it is believed the individuals were likely closely related, perhaps a multi-generational family.
What is also remarkable is how the species seems to transition in its features, from primitive to modern, as you move down the limbs. The top of the limbs – the pelvis and shoulders – are primitive, like its cone-shaped core, but they culminate in astonishingly human-like extremities. The hand is almost entirely human-like, except for the highly curved fingers: perfect if they’re trying to grip things. But their shoulders were able to rotate more than ours, suggesting they engaged in climbing. And the feet were virtually indistinguishable from ours, making contact with the ground in a similar way. 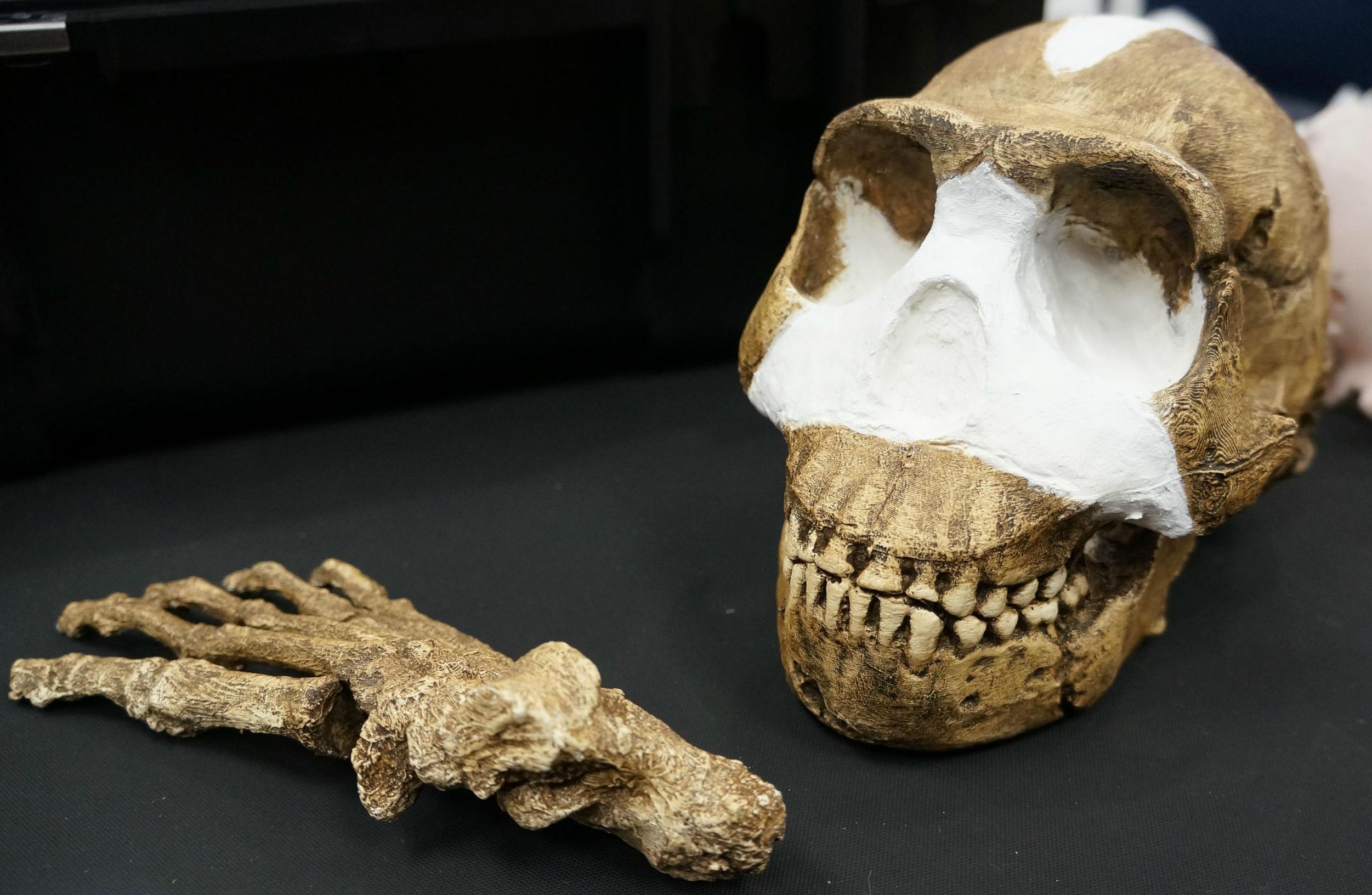 Homo naledi foot and partially reconstructed skull. Taken at the University of Witwatersrand. Credit: Justine Alford
So how did this collection of individuals arrive in this dark, isolated and extremely difficult to access cave? And difficult is not an understatement: one of the narrowest cracks was a mere 17.5 centimeters wide, and as far as the group can tell, there were no other entrances to the tiny chamber. So unwelcoming that no other species were found here, aside from a few rodent and bird bones.
After ruling all of the probable scenarios, such as mass death, transport by water and predation, the team was left with the improbable: this species was deliberately, repeatedly disposing of its dead in a protected area, away from the external environment. Before now, we thought that was a characteristic specific to modern humans.
“What does that mean for us?” ponders Berger. “Did we inherit it, has it always been there in our lineage, or did they invent it?” And for a species with such a tiny brain, the latter possibility is mind-boggling.
Of course, the questions do not end there. The chamber was in total darkness. How did the individuals navigate their way round these slender, jagged tunnels with death-drops around multiple corners?
“Is it a coincidence that the earliest evidence of controlled fire is only 800 meters away?” asked Berger, referring to the nearby National Heritage Site of Swartkrans. “It’s speculation… But animals don’t go into the dark.”
Aside from the evidence of ritualistic burial, what else do we know about their behavior? “Nothing,” Berger chuckled to IFLScience. “We can infer from their bodies that they are long-distance walkers, again that’s something almost unique to humans. And it’s pretty clear from those fingers that they’re climbing, but we don’t know what they’re climbing. That’s not a tree climbing hand.” 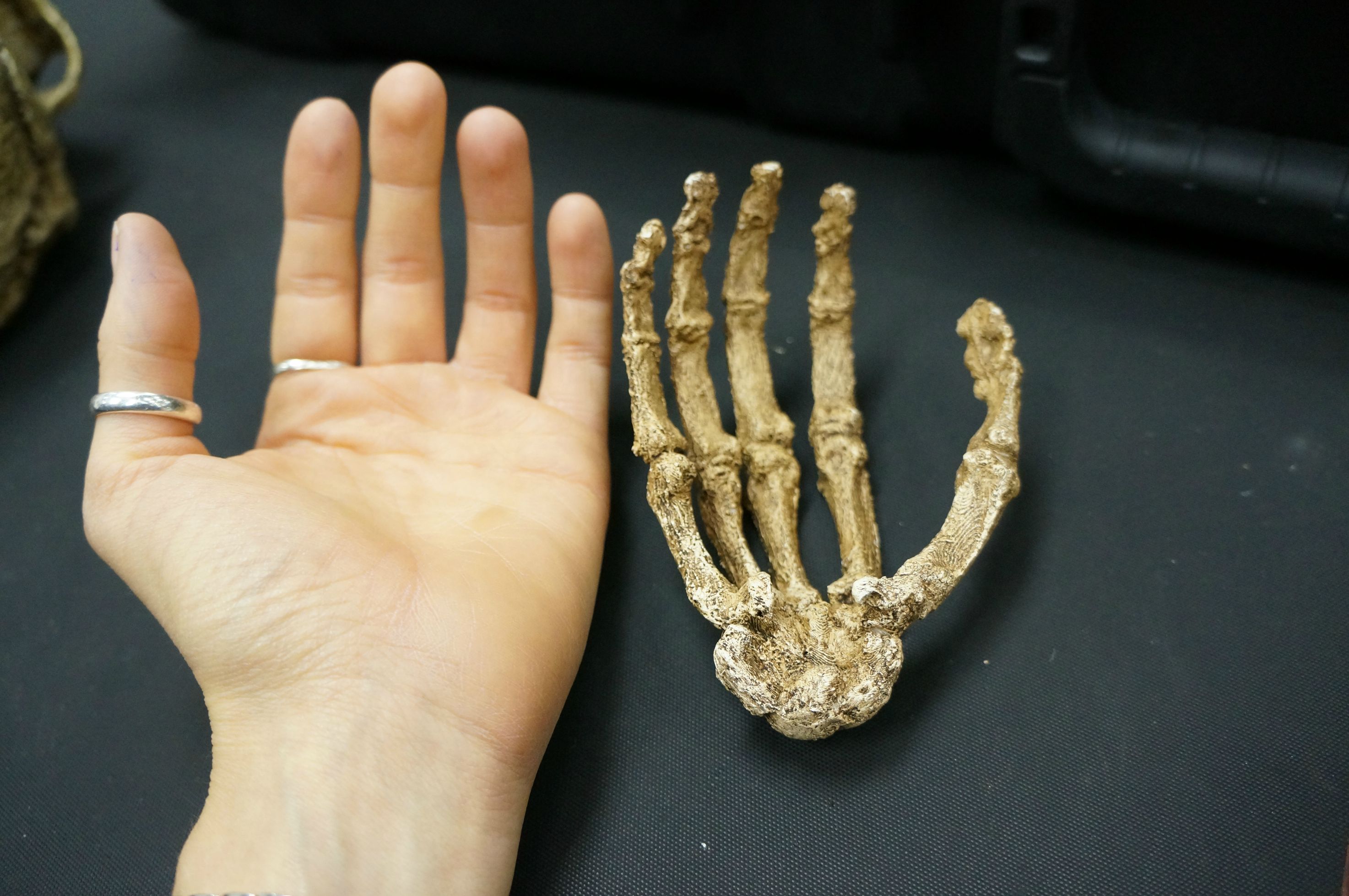 Homo naledi hand, showing the curved fingers, taken at the University of Witswatersrand. Credit: Justine Alford
As it stands, we don’t know how old the fossils are, nor do we know for how long the species existed. But we know it’s a minimum of 2 million years old, perhaps even close to 3 million, and at the very least a candidate for the base of our genus, says Berger.
And if you want to see and encounter this historic find for yourself, the fossils will be on display for an entire month in the Cradle of Humankind's official visitor center, Maropeng.