Showing posts from July, 2016
Show all

These 10 units of measurement have fascinating roots

If you’re a postmenopausal women looking to keep your brain sharp (really, isn’t everyone?), a growing body of research shows that taking estrogen is probably not the way to go, even if you ask for a prescription as soon as your menstrual periods start to dwindle. On the other hand, postmenopausal hormone therapy won’t  dull  your brain, either, according to a new  study  out this week. That’s reassuring for women who opt for estrogen to relieve symptoms such as hot flashes, which, along with prevention of osteoporosis, are the only  Food and Drug Administration-approved reasons  for going on the hormone. The latest study on this topic, published online by the journal Neurology , investigated whether taking estrogen around the time of the menopause transition protects the brain, while going on it later doesn’t. The timing hypothesis has been circulating for at least a decade and a half or so, ever since the landmark  Women’s Health Initiative  (WHI) concluded that menopausal
1 comment
Read more

Your iPhone or Mac could be hacked with an iMessage 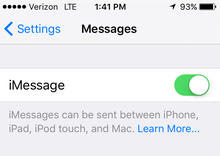 Your iPhone or Mac could be hacked with an iMessage There's a new warning for Apple iPhone and Mac users about a security vulnerability that could let a hacker infiltrate your device by sending you a rogue iMessage. CNET reports the bug was discovered by a researcher from Cisco Talos. The company warned that hackers could send a .tif file (a type of photo file, like .jpg) via iMessage that, when received, can execute a code that gives the hacker access to your device's internal storage and stored passwords. You may think you're safe as long as you don't click on any suspicious images, but unfortunately, that's not the case. "A malicious image file can execute remote code," CNET's Iyaz Akhtar explained. "The problem is, certain applications like iMessage automatically render images by default. Remote code execution could also be achieved through MMS messages, attachments and web pages." The flaw has been patched in the  latest ve
Post a Comment
Read more

A lot of people are unhappy with how Microsoft is handling Windows 10, so despite all of the surprisingly great reasons to upgrade , many are fighting tooth and nail to avoid upgrading at any cost . The biggest complaint? Loss of control. Sure, there are some quick and useful hacks that you can try, including Taskbar customizations and tweaks to the Start Menu , but these just aren’t enough. Microsoft has taken away too many options. One way around all of this is to use the Group Policy feature. If you’ve never heard of it before, don’t worry. It may be powerful, but it’s simple to understand. Keep reading to find out how you can start taking advantage of it now. What Is Windows Group Policy? Group Policy provides a centralized way to manage and configure all kinds of settings across all computers on a given Active Directory network. The settings are maintained by a domain controller and individual computers can’t override those settings. However, computers that aren’t on an
Post a Comment
Read more

How Do Mobile Emulators Even?

How Do Mobile Emulators Even?  by   Jen Looper        How Do Mobile Emulators Even? Every mobile developer’s professional life is dominated by those little moments where fingers hover over the keyboard while the developer waits patiently for a window to appear on the screen containing a version of the mobile app over which he or she has been laboring. Over the course of a day, these individual, hopeful pauses will culminate in a series of sighs of relief (or alternately, curses) as the mobile emulator does its job. A great emulator is critical to the creation of a great mobile app. But what are emulators, even, within a mobile context? How do they work? Why are some better than others? Why are Android and iOS emulators so different? And what’s the difference between a simulator and an emulator? Let’s take a l
Post a Comment
Read more

Interesting Facts about JUNO (Jupiter) Spacecraft!   by Salman Gurung Juno , the American spacecraft has entered the Jupiter's orbit after almost 5 years of its voyage. Rocketed off in August 5, 2011, it reached Jupiter on July 4, 2016! It marks another greater success for the mankind and its achievements on the farther Space exploration. As suggested, it will help us to learn more about the formation of the Jupiter and its composition, gravity field, polar atmosphere and magnetic field. _________________ Here are some of the interesting facts about the JUNO JUNO took exactly 1766 days (4 years, 10 months) to travel to the Jupiter. It traveled at the maximum speed of 38,000 km/h, making it the fastest air/spacecraft ever, and it weights exactly 3,625 kgs. It was manufactured at the cost of USD 1.1 billion. The spacecraft will orbit Jupiter 37 times over the course of 20 months at the speed of 0.17 km/s and at the height of 7,300 k
Post a Comment
Read more

A Beginner’s Guide to Android Kernels When people mention the advantages of rooting, one of those words that get thrown around a lot is “kernel.” When I first started looking into rooting, I was never quite sure what a kernel exactly was. Obviously it wasn’t a piece of popcorn, but nobody ever sufficiently explained what a it did and why I should be interested in them. However, once I did figure out what they were it certainly changed my attitude toward them. Swapping out your kernel is one of the best ways to take advantage of rooting and I highly, highly
Post a Comment
Read more

July 02, 2016
Drone.io CI setup Drone.io is a Continuous Integration for Github and Bitbucket that monitors your code for bugs. It uses GitHub (or some other online service) to fetch repositories and Docker containers to run the build process. It can be used as a service (free for public projects), or set up on a custom server for free. On this page it is described how Drone was configured to build OpenWrt project hosted on GitHub . Steps Install and start Docker This step depends on your build machine so it is not going to be covered here. Please refer to official Docker documentation and see how to install Docker on your machine. Create Github application Click the link and create a new application. In this example we are using: Homepage URL: http://tango.drone.openwrt.ninja/ Authorization callback URL: http://tango.drone.openwrt.ninja/authorize There you will get Client ID and Client Secret . You will use that in the next step. Create Drone c
Post a Comment
Read more

Not Getting Android OS Updates? Here’s How Google Is Updating Your Device Anyway Android updates don’t matter anywhere near as much as they used to. Most Android devices don’t get timely operating system updates, but Google is updating more and more of the Android operating system in the background. This is Google’s real plan for battling Android fragmentation: Update as much of the operating system and its apps as possible without going through device manufacturers or carriers. Older devices aren’t as outdated as they used to be. Android 4.2, 4.3, and 4.4 Are Minor Updates Android updates were once extremely important. For example, when Android 4.0 Ice Cream Sandwich came out, it brought an entirely redesigned interface, performance improvements, and even APIs limited to Android 4.0. Certain apps wouldn’t run on devices without Android 4.0. Google Chrome required Android 4.0, so devices that were never upgraded from Android 2.3 Gingerbread still can’t use Google
Post a Comment
Read more