August 26, 2015
photo credit: An illustration of a wormhole in action. edobric/Shutterstock.
Share on facebook117K Share on twitter632 Share on reddit Share on google_plusone_share More Sharing Services
Scientists have developed a magnetic system that mimics the behavior of a wormhole – theorized to allow space-time to be bent, and vast distances to be traveled in an instant – but it absolutely is not an actual wormhole, so don’t get too excited. However, what they did, which was to make a propagating magnetic field invisible, is actually very interesting. You can get excited again.
The research, by a team from the Autonomous University of Barcelona (UAB), was published in the journal Scientific Reports. They describe how they created a small sphere about 45 millimeters (1.8 inches) across, made of a spherical ferromagnetic (one that can become magnetized) surface, a spherical superconducting layer, and an inner ferromagnetic sheet wound in a spiral. The superconducting layer was made of superconducting strips glued to a sphere, and the entire device needed to be submerged in liquid nitrogen for the superconductor to work. The magnetic field was supplied at one end by a current passing through a coil.
When the magnetic field entered the sphere at one end, the researchers showed how it would appear at the other end as an isolated monopolar-like field – but within the sphere itself, there was no trace of the magnetic field. The dual-layered design was responsible for making the magnetic field invisible; the attraction and repulsion of the magnetic field was cancelled out, making it undetectable. “Our wormhole transfers the magnetic field from one point in space to another through a path that is magnetically undetectable,” the researchers wrote in their paper.
“It disappears in one point and reappears in a different point, as if it were travelling through another dimension,” lead researcher Alvaro Sanchez added to IFLScience. 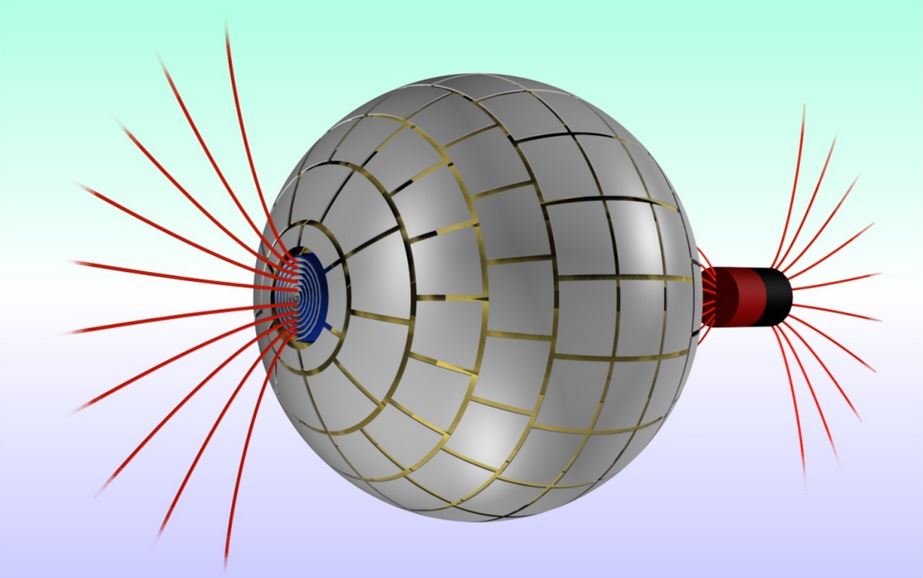 Shown is an illustration of the field entering the sphere, left, and passing out, right, like a "wormhole." Jordi Prat-Camps and Universitat Autònoma de Barcelona.
Why is this important? It means that the magnetic field could travel from one side of the sphere to the other without producing any noticeable effects. If you placed a magnet inside the sphere, it would not be influenced by this propagating field at all. Of course, in this case the magnetic field is actually very much there in the sphere – it’s just not detectable. In an actual theoretical wormhole, an object would disappear at one point in space-time and reappear at another. So this isn’t quite the real deal.
“It can be said to be like an illusion,” said Sanchez. “It’s not an actual wormhole, it’s not creating a real path in space-time that connects two points. It’s a magnetic field that achieves a similar effect.”
On the possible applications for the research, Sanchez said it could be useful for magnetic resonance imagers (MRIs) in medicine. “One could perhaps use this kind of wormhole to do simultaneous imaging,” he said. “You could have three detectors in one MRI scan to take images of the knee, liver and head. They would not interfere, because their magnetic fields would be invisible.”
The team now wants to study the same effect using different geometries. For example, they might try and use a cylinder instead of a sphere to recreate the effect, to highlight some of the more practical applications for the technique.